“One Call Does It All”

A. Parker Contracting has been repairing and replacing roofs, siding and gutters in Delaware and surrounding area for over 40 years.

Our Services
Get a Quote Our customers and clients want and deserve highest quality materials

Has your home been overlooked or under-cared for?

Update the look and feel of your whole home under budget!

Our Services You can trust A. Parker Contracting for responsiveness, reliability, trustworthiness, attention to detail, and follow through with talking care of your job from A-Z. Our motto is “One Call Does It All." 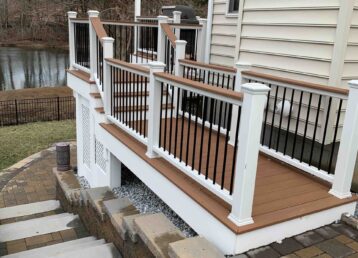 We have been installing and repairing roofs in Delaware and surrounding area for over 40 years. Our team will make sure your home is protected from the elements with quality gutter products. We repair and install new siding using the highest quality materials along with the lowest possible prices. Our team will ensure your home is looking like new with high quality exterior paints.

Our Projects We're lucky to have worked with such great partners, both commercial and residential. Al was amazing. He was out to my property the same day I called for an estimate and gave a fantastic price on a whole new roof on a 2500 sq foot house. He was very knowledgeable about different types of roofing, as well as, the best products and warranties. The job was completed in 2 days. This was 3 years ago. 6 months after the roof was on we had leak due to a branch falling. I called and he had someone out the next day to fix it. Three months ago, another branch caused a leak, and again the next day he had someone out to repair it. Not only did they repair the actual problem, but repaired a “soon to be” problem as well.
I cannot recommend him highly enough
Tiffany W.
Boothwyn, PA

So glad we contracted with this firm. Needed new gutters on the house and garage as well as lightening rods on the barn. The quoted price was reasonable, the crew were polite, professional and efficient, and the cleanup was so thorough the only way you’d know they were here is the much improved look of the property. Won’t hesitate to call A. Parker Contracting for any future needs.

Al provided great service. Not only did he repair my roof but also tightened up my gutters and facia board free of charge. On time, quick response, great attitude, and great price–I would definitely use him again!

I called several roofers but only 2 showed up. Mr Parker was very knowledgeable. His price was competitive . They completely removed/replaced my shingle roof in March of 2013. I seen his add on Angie’s list . He walked me through the process from A-Z. Before his men finished they walked me around the exterior to make sure I was satisfied. 2 months later I noticed a shingle that was raised. I called Mr. Parker and within 3 hours he’s was there and repaired it. I’m also going to have them paint my house ( which is so badly needed lol). I always wait 1 year before posting a home improvement review . I would highly recommend A. Parker contracting

I have use A Parker Contracting three times now. The first time I called in a panic – the ridge vent on my roof had flown off in a wind storm and we were expecting heavy rain. I had visions of rain flooding into my attic! Most roofers wouldn’t even consider this job – they didn’t even show up because it was a small job. Not A Parker! Not only did he came out immediately, he tarped the roof until it could be fixed after the storm. Since that initial visit, he has also been out to fix/replace my gutters and repair siding that flew off of my house in yet another wind storm. I will be using him again in the future for possibly repairing a bay window that has some wood rot and eventually, a new roof. He is honest and hard working. Response time has been quick. It is nice to have someone to call when something goes wrong in your house, and A Parker Contracting is a perfect company to call to get the issue fixed quickly, correctly and at a fair price. Highly recommend!

These guys do a great job. Punctual, courteous and honest. Came over, took care of repairs and gave me an idea of what to expect in the next year or two. None of the scare tactics or up selling gimmicks that certain roofing companies employ out there. Will definitely use him again. Thank you.

We had a new roof, gutters and the house painted by A Parker. Al was very easy to work with and he was very good at explaining everything. There were two different work groups, one for the roof and the another painting/gutters. They worked very professionally. We are very pleased with all of the work and love how it looks. It did take a little time to get the warranty papers for the roof work, but Al followed through to the end.